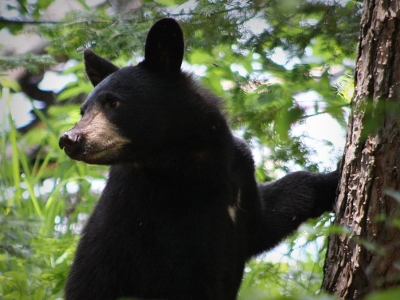 A changing climate has shifted the spatial distribution of animal species worldwide, often resulting in new conflict between animals and humans. In California, black bears (Ursus americanus) are one such species. Human-black bear conflict can lead to bear death, physical harm to humans, and damage to property all of which hinder conservation efforts. The primary driver of bear interaction with humans is resource availability, as human areas provide easy sources of food. Conflict is likely to increase as climate change exacerbates drought and fire, leading to habitat and food loss for bear populations. We aim to demonstrate the connection between climate change and human wildlife conflict by determining the specific drought and wildfire attributes that influence rates of conflict. To do so, this project will develop a predictive model to define how fire and drought variables affect human-black bear conflict and predict likelihood of future conflict with bears. This serves to fill the gap in the current knowledge of this relationship between conflict and aspects of climate change. Our goal is to equip our client, California Department of Fish and Wildlife and other wildlife managers with knowledge of where to allocate conflict mitigation efforts in order to most effectively and efficiently reduce and prevent conflict with black bears now and in the future. We will perform spatial analysis using R and ArcGIS Pro to create a predictive map that shows hotspots and coldspots of conflict. We anticipate identifying communities currently being affected by conflict that are not using the existing conflict reporting system. Public outreach efforts will be developed to increase knowledge and awareness in communities that are likely to be affected by black bear human conflict now and in the coming years.