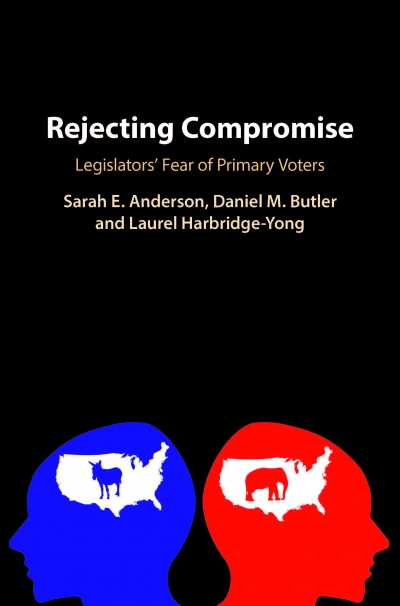 If you think legislators aren’t getting much done, you have plenty of company. Poll after poll finds Americans aren’t happy with the perceived gridlock in Washington and the job their representatives at every level are doing.

Conventional political wisdom blames the “partisan divide” — the failure of legislators to work together. But a new book co-authored by a UC Santa Barbara scholar finds that the refusal to compromise on issues isn’t rooted simply in disdain for the other side, but in the fear of being punished in primary elections by disgruntled voters.

“Rejecting Compromise: Legislators’ Fear of Primary Voters” (Cambridge University Press, 2020) argues that the “routine rejection of what we call half-loaf compromises — proposals that move policy closer (but not all the way) to the legislator’s preferred outcome — could be a significant contributor to legislative gridlock.”

Sarah E. Anderson, an associate professor of environmental politics at the Bren School and a co-author of “Rejecting Compromise,” explained that the book arose from studies of legislators and a collective bafflement at their refusal to compromise.

“We thought, ‘What? You’re not supposed to do that,’” she said. “If we offer you something that’s closer to what you said you wanted and we tell you it’s a one-shot deal, and you’ve got to take it or leave it, you should take it. What is going on here?”