Author's note: This story was written in the fall of 2021. But with summer approaching, fire is back on the minds of Californians, and with it, the stories of past fires. Presently, most of the state is in moderate to extreme drought conditions prior to summer - and extreme fire weather conditions are quickly becoming part of everyday life in the Western US. There is no better time than now to acknowledge the impacts of fire to the members of our community.

Cristina Robinson, a graduate student at the Bren School of Environmental Science and Management, spent the first few weeks of the fall quarter 2021 evacuated from her new home. As one of many UCSB students impacted by the housing crisis, Robinson lives with her partner and their two dogs in a guest house in the mountains near Refugio State Beach, a few miles up the coast from the UC Santa Barbara campus.

When Robinson was younger she loved the Santa Ana winds because they brought good surf to the beaches of her childhood home in Orange County. After the fires of recent years, however, they’ve brought anxiety rather than excitement. The morning of October 11th, Robinson left her home with that same anxiety.

“I remember it being so windy. I literally thought I hope there are no fires anywhere today.”

Around 1pm that day, Robinson received a text from her landlord that there was a small fire in the area. He told her not to worry too much. Later that day, one of her classmates sent her a text that the Refugio area was under a mandatory evacuation and offered her a place to stay. She rushed home, driving directly into the thick smoke of the now closed road to pick up her dog and other essentials. With her partner and their other dog out of town, the task of evacuating was left to Robinson alone. When she arrived, her landlord invited her to the main house’s balcony to see the fire. It was there she saw the mountain ridge lit up in flames of the Alisal Fire.

All she could think about was how she would get everything that mattered out of her house. Her landlord, however, seemed to shrug off the fire, mentioning that he and his wife had watched the last blaze from their jacuzzi. In twenty years of living there, he had only evacuated for the first fire that happened in the area.

“My landlord told me to not think about what to take with me too hard because it’ll just make me freak out. And I’m standing there staring at the flames from my living room where I’m just like–yeah–we have got to go.”

Although he didn’t leave on the same day as Robinson, the Alisal Fire became the second time he evacuated. When Robinson and her dog Murphy left that night, they passed a bear on the road–another evacuee seeking refuge from the growing fire.

“My dad’s an army dad,” recounted Robinson. “We always had our emergency things ready–water, flashlight, first aid. But even with that background, I was still not prepared to evacuate or handle the stress of fire.”

Months later, Robinson still felt the impact of the fire on her emotions and workload. Less than two weeks after returning to her home, Robinson evacuated again because of extreme rain conditions. All of this occurred during her first quarter at Bren, leaving her emotionally exhausted in a way that many victims of wildfire experience for long times after the event.

This danger of wildfire weighs heavily on the minds of many Bren School students and faculty. Two days after her home burnt down in the 2008 Tea Fire (burn zone pictured above), Assistant Dean Satie Airame’s uncle called her to tell her: “You’re a real Californian now.” Wildfire is part of the fabric of California’s landscape.

“The Southeast has hurricanes, the Midwest has tornados, and California has its wildfires,” Dr. Airamé stated. The Tea Fire took their home, but also offered new beginnings.

“After days of sifting through ash, I was showering at a friend’s house and I started to sing and thought–why am I singing, my house just burned down?” Dr. Airamé said. “It was because I felt good physically. I’m okay. I’m healthy. I’m having a shower and my family and loved ones are safe. The loss was freeing in a way. I could just be with no attachments. We’ll rebuild. And we did.”

Their new home was built to withstand fire. Made of stucco, commercial sheetrock, and dual pane windows, the house could be there for hours before it starts to burn. Her husband, who saw his plant nursery burn in the fire, also had the opportunity to create something entirely new: Aloes in Wonderland. The private botanical garden was born from devastation as a treasure to the community and future of fire-prone landscapes.

Dr. Airamé shared cautious optimism. “We built to survive the next fire. But I have seen structures of cement and steel crumble. It’s not fireproof, but it is fire resistant.”

Just four years later, the scale has changed. At the time, the Thomas Fire became known as California’s largest wildfire, burning 281,893 acres. But at the start of 2022 it’s only the eighth largest fire in the state’s history. The August Complex Fire burnt 1,032,648 in 2020–more than three times as much land as the Thomas Fire.

While California’s wildfires are integral to its ecosystem, climate change brings blazes more extreme than anything the land has grappled with before. From staff who saw their homes burn to those who study these dynamics in their labs, addressing society’s interaction with a fire-prone landscape connects many narratives throughout our school.

This is where the work of another Bren student, Bri Baker (MESM ‘22), comes in. Working with the Ventura Regional Fire Safe Council for her group project, Baker’s work has brought her to a new understanding of the trauma wrought by experiencing wildfire. As a lifelong resident of Ventura County, Baker has seen several fires burn down homes in her community, forever changing the lives of the victims.

She shared her first memory of wildfire in her community. “It was the day of the AP tests in 2013 and I started to smell smoke which I thought was weird. When we walked out we saw flames on the hill above.”

This work exposed Baker to the psychological impact fire has on the people and communities it affects. While there is work to connect with impacted communities, it often misses the most vulnerable victims.

Through their project, Baker and her teammates connected with a Ventura County nonprofit group, Promotoras. The Promotoras work in communities that are largely migrant agricultural workers. In towns like Piru, an unincorporated community nestled in a valley in the Los Padres National Forest, fire is an imminent threat to a community whose voices often go unheard. As members of the community, the Promotoras were able to collect surveys from the vulnerable populations that typical methods miss.

Baker, like many others, worries about planning decisions in communities on the wildland-urban interface, much like Piru. Naomi Tague, a professor with the Bren School, agreed with Baker on this matter. Tague is a systems engineer who sees the solution to managing wildfire as a diverse collection of actions.

Principal investigator of The Tague Team Lab, Dr. Tague creates models to characterize the ecosystem dynamics of various landscapes. Tague describes herself as an “expert at developing models.” She brings together other experts and people who work on the ground to understand what changes in a system might cause–like the effect of a field treatment or reservoir management.

Working alongside Bren professors Sarah Anderson and Andrew Plantinga, Tague and her team developed SERI Fire. The project looks at the best management strategies for wildfire, especially in places like California. Like Tague and Baker mentioned, this goes far beyond fire suppression.

The unique chaparrals of Santa Barbara make it stand out for the future of wildfire management compared to more commonly discussed forests in the Sierras.

“Santa Barbara is a place where chaparral is really happy. On one hand, that’s great. But it also means they grow back quickly after fire, and that’s renewed fuel,” Dr. Tague said.

Dr. Tague shared the bittersweet truth that high intensity fires may decrease in the Sierras because they will ravage so much forestland in the coming years. The future for chaparrals is much less predictable.

“You can go hiking up by the Thomas Fire scar and see chaparral happily coming back,” she said. Fire and mudslides have changed the channel forever, but the recovering vegetation means the threat of fire is still just as real. The residents affected by the Thomas Fire may soon be threatened again. For this reason, choices for wildfire management must address diverse threats to residents of Santa Barbara.

Tague’s warnings led back to the concerns shared by many others. Robinson, who lives up Refugio Road, only has one exit route from her mountain home. This is the type of issue that Tague says needs to be addressed in wildfire and community management.

Both Airamé and Baker brought up the “bleak and desolate” post-fire landscapes. But they also spoke of being in awe of what came after. Fire follower flowers captured the imaginations of both, and became a symbol for the emergence of things that are new and beautiful in light of disaster.

“It was really cool doing seed scouting work,” Baker said. “I would find these fire followers among the char, and they are amazing. I felt bad sometimes finding beauty in the flowers thinking of those who lost so much from the fire. But it also gave me hope. Things come back. And things will be different in the future.”

The future of wildfire depends on conditions we cannot predict. Recent years have burnt a fear of fire into the Californian psyche, but society is resilient and creative. Now is the time for great minds to come together, understand the impact of past fires, and find new ways to coexist in a constantly-changing environment. 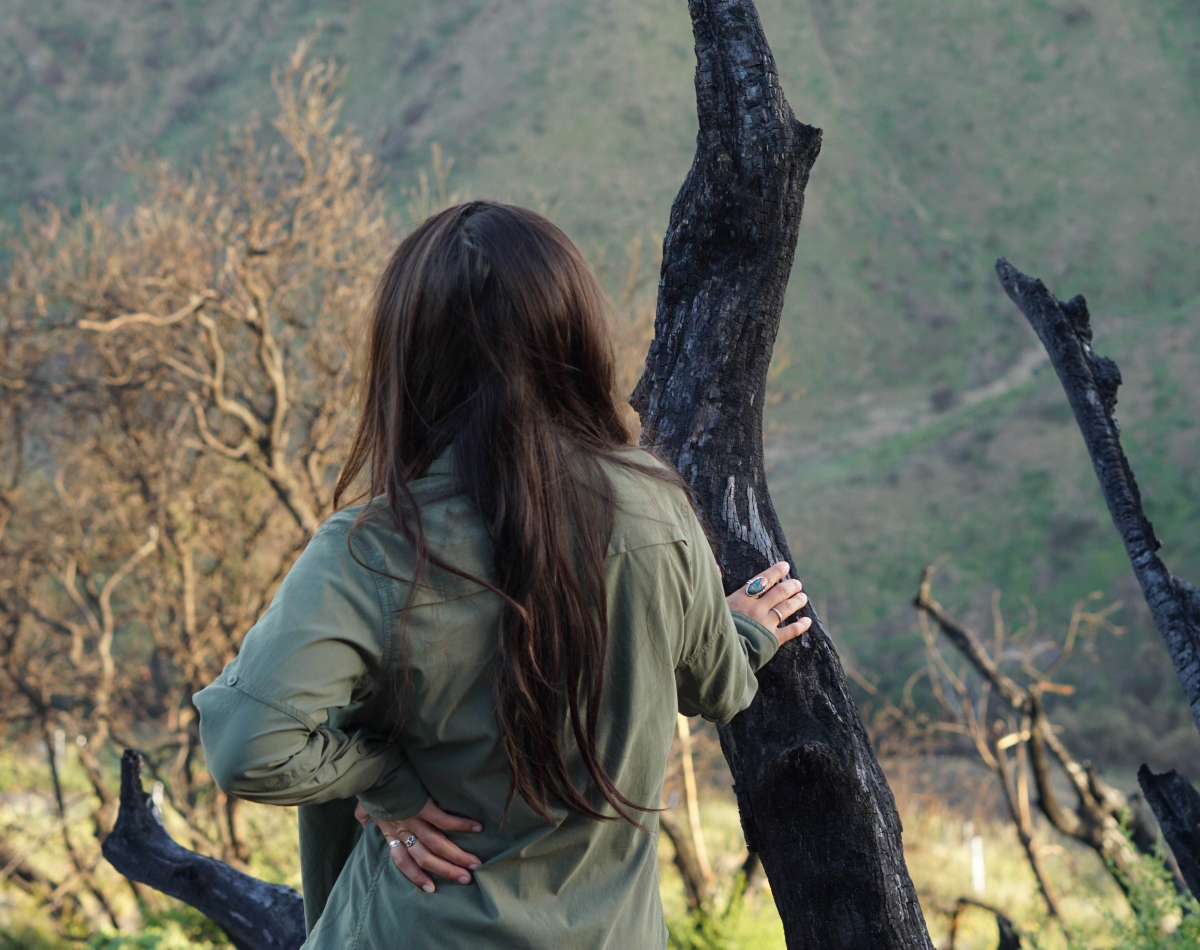