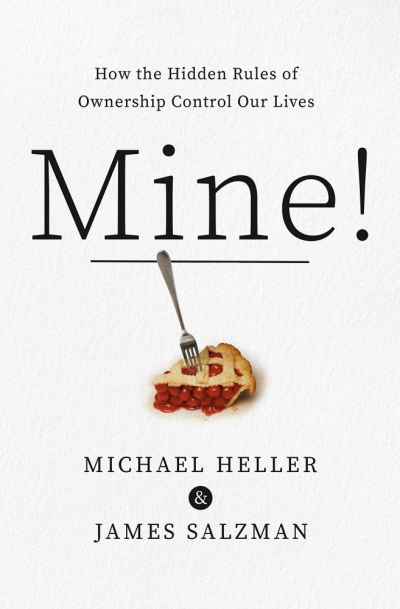 From the sandbox to the skies above, ownership is everywhere, even if you don’t see it. In their new book, “Mine! How the Hidden Rules of Ownership Control Our Lives,” James Salzman, the Bren Distinguished Professor of Environmental Law, and co-author Michael Heller of Columbia Law School take an in-depth look at how we define ownership — and how it’s defined for us — and the various ways people lay claim to things.

In a conversation with The Current, Salzman shared some insights into the ways conflicts around ownership impact our lives and how we can navigate them.

TC: Why a book about ownership?

JS: People often think of ownership rules as distant and legal and for someone else to decide. But that’s not true. We face hundreds of ownership conflicts each day without even realizing. These decide whether you are at the front of the line or the back, where you live, what medications you take, what you watch and listen to. We pass through ownership every day just like the fish that doesn’t realize it’s swimming in water.

In every culture, “mine” is one of the first words that children speak. On playgrounds, all you hear is kids shouting “mine, mine, mine!” Ownership rules the sandbox. We assume ownership is natural, obvious, simple. But that’s just not true. Ownership is always up for grabs. Once you start looking for the hidden rules of ownership, you will see them everywhere. They determine fights over reclining airline seats and whether you can share HBO passwords. Also they are implicated in big issues like climate change and wealth inequality. In fact, it’s hard to find any conflict that isn’t framed by contested ownership.

TC: You write that what’s “mine” reflects a choice among competing stories — what does that mean?

JS: It turns out that humans have just six simple stories everyone uses to claim everything in the world. Each story feels natural and self-evident. If you stop and think for a moment, though, it’s apparent that these stories are often in conflict. In fact, ownership conflicts are all around us all the time, and always up for grabs — and if you’re not the one choosing, then someone else is choosing for you.

Let’s go back to the playground sandbox. A kid sets aside his shovel and another kid grabs it. The first kid says, “This shovel is mine. I had it first!” The other says, “No, I’m holding onto it!” Their fight looks like “mine” versus “mine,” but it’s really a deeper battle between two competing stories: “first come, first served” versus “possession is nine-tenths of the law.” These are two of just six basic stories that people everywhere use to claim everything. The same stories that kids use in the sandbox also operate on the global stage. Think about who gets priority for the COVID-19 vaccines. The stakes are higher, but the battle is over competing ownership claims for who should get to the front of the line.

Read the full interview with James Salzman at The UCSB Current.