In his career in the renewable energy industry, Matt Riley has been guided by a question that seems simple on its surface: “Are we doing this the right way?”

But defining the “right way” is actually a complex problem, one that that takes input from diverse stakeholders, including ecologists, engineers, legal and regulatory specialists, and more. As Head of Grid-Scale Renewables at ENGIE North America, a French utility working to be a leader in the transition to a zero-carbon future, Matt reviews potential projects with a team that brings all these perspectives to the table.

“I came to Bren from a hard science background, but I quickly learned that wasn’t the only factor to consider,” he says. “By working in groups at Bren, I learned to think holistically about an issue. I learned to take a step back and consider problems from other angles, to be open to different points of view and discuss how those interact. That’s how you find the right way.”

Once a PhD candidate in Chemistry at UCSB, Matt switched to the Master of Environmental Science and Management program when he saw the opportunity to earn a graduate degree that would train him to tackle real-world issues. “I wouldn’t have characterized myself as an environmentalist at the time,” he says. “I came in very raw and spent two years learning about lots of different issues. Bren quickly opened my eyes to ways I could apply my science background, but it also challenged me to look at angles that I had never even thought about before. As I learned about all these different aspects, my interest and my engagement grew.”

Bren quickly opened my eyes to ways I could apply my science background, but it also challenged me to look at angles that I had never even thought about before. As I learned about all these different aspects, my interest and my engagement grew.

The renewable energy field was one of many that attracted Matt’s growing interest. His career at Clipper Windpower, a wind turbine manufacturing company, started with an internship that the Bren Career Development team helped him secure in his second year. The team reached out to Matt as one of the students they thought would be a good fit for the company. After some discussion and preparation work with the team, Matt went in for his interview and was hired on the spot. A few months later when he graduated, he made the transition to being a full-time employee. 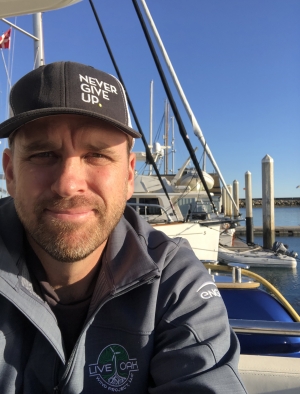 “After that, I was on the reverse side,” he says. He had seen the reciprocal benefit to companies and students through his own experience, so he continued his relationship with the Bren Career Development team. “I hired Bren students and alumni as interns and full-time employees to Clipper. Then when I started my own company, Infinity Renewables, five years later, I always had a very high percentage of Bren students and alumni on staff.”

Over the next ten years, Infinity Renewables grew into one of the top wind power developers in the nation. Before Matt and his business partner developed their business plan, Matt hadn’t seen himself as an entrepreneur. His experience at Bren and at Clipper Windpower, however, gave him confidence that he could face the upcoming challenges and succeed.

“The skills I learned—how to present and speak and interact with people and respect their opinions, even when they were different from mine—were a cornerstone in building my career,” he says. “And I was fortunate to leave Clipper on the best possible terms. The CEO at the time, who is one of my mentors, said I would be an extension of his legacy. That framed the path ahead for me.”

ENGIE acquired Infinity Renewables in early 2018, and Matt again turned to skills he learned at Bren as he negotiated the company’s sale. “I asked a lot of questions,” he says. “I wanted to understand their goals and objectives, and I had to think about how I aligned to those. Listening, and thinking about how your own agenda might intersect with another person’s, has just been critical every step of the way in my career.”

At ENGIE today, Matt is still able to engage regularly with Bren students and alumni, hiring interns and full-time employees, participating in the Bren Alumni Council which he helped form, and participating in the Eco-Entrepreneurship program. He says that, as he speaks to current students and recent alumni, he encourages them to stay curious and reach out to the Bren network.

“You may not know exactly how to engage, and an interaction may not go exactly how you thought it would, but that’s part of the magic of the network,” he says. “You might have conversations and experiences you never imagined, and find something you’re really passionate about. All you have to do is start a dialogue, and be willing to try something new.”

Get to Know Bren Programs

We couldn't be prouder of Bren alumni and the many paths they've taken to become environmental leaders! Explore our graduate programs in environmental science and management - and take the next step toward your future solving environmental problems.

Master of Environmental Science and Management

PhD in Environmental Science and Management