In this UCSB Alumni Spotlight, MESM 2019 grads Taylor Heisley-Cook and David Mun were interviewed about The Hurd Co., the company they co-founded with cohort member and project partner Celine Mol, as their Eco-Entrepreneurship Project.

Read the full interview at alumni.ucsb.edu 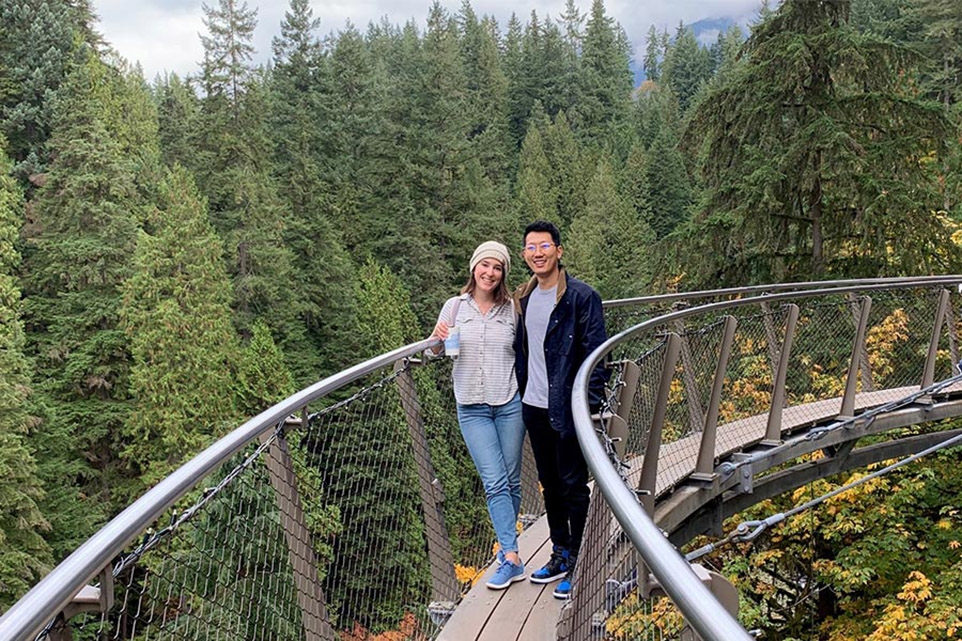 Though they had different experiences leading them to this opportunity, they both had a passion for environmental science and sustainability. Growing up in Los Angeles, David saw firsthand how fashion influenced his community and how it became a necessity for sustainability to be ingrained into this culture. After undergrad, Taylor got to work with a marine plastics non-profit where she found a passion for saving the environment. The Hurd Co. started as a thesis project and is now a company aimed at eliminating waste in the creation of fabrics. Co-Founders Taylor and David believed in and created this company so we can all waste to wear.

We interviewed Taylor and David to learn more about the Hurd Co., the many challenges of sustainability, and what we should see from them in the future.

How did The Hurd Co. come to be?

Taylor: It was the middle of winter quarter and, at that point, David and I were on different projects. He had a really cool idea to make adjustable shoes that expand as a child grows. I was looking into tiny homes and how to encourage sustainable living.

One day, I was sitting in class and I had a thought that evolved into a question. What happens to plant material after the “useful” parts of the crop are harvested? Take hemp, for example. The plant is harvested for CBD, protein, and traditional hemp fiber. After all of that material is removed, about 70% of the plant is thrown away or burned. Was there a way to turn that material into fabric?

Emily Cotter, the director of the Eco-Entrepreneurship program, encouraged me to go for it and connected me with people who could answer my questions. I wanted to find out if this was an industry need and if it was scientifically feasible. From there, The Hurd Co. started to grow.

I decided to put this through as a thesis project three days before proposals were due. After it was accepted as a project, it was up to me to build a team. I always admired David’s work and passion for sustainability in the apparel industry, and knew we would be great teammates. I asked if the project was something he would want to join and it was. Our third amazing teammate Celine made us a trio!

David: We had this desire and common interest to innovate within the apparel industry because we knew there were a lot of issues. It’s a traditional and old industry that has been doing things the same way for a while. It was a timely opportunity too, since we saw how the apparel industry was hungry for new innovations. It wasn’t clear yet what innovations are able to reach a large enough scale to make a lasting impact.

Master of Environmental Science and Management