Plastic pollution is a complex, environmental issue that reaches every corner of the globe. Large quantities of discarded plastic waste often end up in oceans, lakes, and rivers, where they accumulate, decompose into tiny pieces of synthetic polymers dubbed ‘microplastics’, and sometimes wash ashore. Hannah Tizedes is a creative marketing strategist and plastic pollution communicator based in Detroit, Michigan. Her colorful instagram platform, @thetrashycollection, is peppered with intricate collages of plastic bits found on the shores of the Great Lakes and beaches all over the world. Hannah’s iconic mosaics have been featured by the likes of powerhouse ENGOs, reusable appliance brands, and apparel companies like Surfrider, Stasher, and Chaco just to name a few.

Caitie Reza (MESM '22) interviewed Hannah to talk about her journey as a freelance artist-activist, the plastics problem, and the connection between digital marketing and environmental action.

Caitie Reza: Tell me a bit about yourself.

Hannah Tizedes: I grew up in a really small town in Michigan called Flatrock. No one ever knows where that is, so I usually just say “south of Detroit." As a kid, I’d go to Lake Erie, near where the Detroit River stops running. I did my undergrad at Michigan State University, where I started off as an art major for the first two and a half years before switching to Creative Advertising. I didn’t want to end up making toothpaste commercials or billboards for big cell phone brands, so I took on Environmental Sustainability studies in the hopes I could advertise for sustainable companies.

You worked at Michigan State’s Recycling Center for most of college. When did you start and what’d you do there?

I started towards the end of my sophomore year and worked there most of college as the environmental communications coordinator. My job was to tell the story of trash on campus at MSU - how it was created, where to compost, how to recycle in the dorms, things like that. A lot of time was spent figuring out how to create more educational tools to put on campus, or help with waste diversion issues at the stadium, for example.

Do you remember the first time you began picking up trash?

It’s really interesting when I talk with my mom about how I got started, she says I was always picking things up as a kid. I’d pick up everything in the aisles of the craft store- she’d be like, “My daughter just likes to pick everything up, I promise she’s not stealing!” Later on, I remember being on a beach pier with my mom and grabbing her little disposable camera to take a picture of this pink balloon floating in the water.  It’s funny, I even had the awareness back then that it  shouldn’t have been there. I actually still have the photo! (pictured)

You were a collector from day one. When did you start combing the beach for tiny bits of plastic?

It really snowballed when I graduated and got a job in Detroit. That job ended up taking me to Europe, and I was living in Portugal for a couple of months. But things went south with the job. I was right on the Southern end of Portugal, so I just started going to the beach and picking up trash. I’d bring it back to my AirBnb at the time and sort through it to see what there was. There were tons of plastic - colorful clothespins, cotton swabs, little sticks- and I’d make little arrangements with them.

Where do you collect most of the trash for your art?

The majority of my trash comes from Lake Erie, because it’s right by my parent’s house. 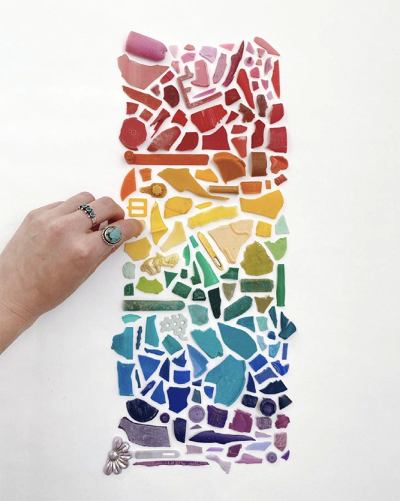 You mostly focus on plastics in the Great Lakes region. Can you spot differences between ocean trash compared to lakes and rivers?

I wouldn't say there's a huge difference in what I’ve found at the ocean versus the lake. I actually find really similar things in both places, which is kind of crazy.

How’d you go from posting pictures on the side to full blown environmental communicator with a thriving online platform?

I just started sharing things. At first, it was this secret little account I had to see if anyone maybe finds this interesting. And I guess they  did- people would comment, “Oh my gosh, I can’t believe what washed up there!” or, “What’s a good alternative?” I finally told my friends and family about it and they were like, “Wow, this is really cool and you should keep doing it.”

Do you remember the first brand that reached out to you?

Stasher actually reached out to me to do a campaign with them. They wanted me to write the words “save what matters” out of plastic. It was so serendipitous, it was exactly what I wanted to be doing. I like helping brands advertise. You know, it was a full circle, and I knew it was something I should stick with even if this is the one time that a brand ever reaches out to me. I just kept going for it, and a lot of cool things have just kind of happened!

Do you have a dream brand that you would die to work with?

I’d have to say Patagonia. Honestly, who doesn’t want to work for them? I also really enjoy working with organizations like Surfrider. They’re not so entrenched in consumerism, they’re really just trying to educate people.

Plastic Pollution in a Nutshell

In a landmark study co-authored by Bren School faculty Roland Geyer, it was estimated that 6.3 billion metric tons of plastic was produced between 1950 and 2015. Plastic pollution dominates both terrestrial and aquatic environments around the world, and threatens every level of the ecosystem. by inhibiting algal feeding, microplastic ingestion has a significantly negative effect on the health of zooplankton. On the macro scale, even camels in the United Arab Emirates have seen significant population declines due to desert plastic pollution. The world is still largely dependent on plastic products. In fact, we produced half of all plastic ever made in just the last 13 years. To put it in perspective:

Why is plastic pollution an issue?

I think a lot of people hear plastic pollution and think of marine ecosystems. But it’s not just the ocean - freshwater ecosystems are affected, too. It’s estimated that over 22 million pounds of plastic wash up every year in the Great Lakes alone.

How widespread is this problem?

I hear from people all over the world on my account! I’ve had people from Hawaii message me saying that they see plastic trash  on hikes at really high altitudes. Hawaii is a notorious destination for floating plastic, Sustainable Coastlines Hawaii just posted a photo of a full fridge that had washed ashore. A lot of islands in the middle of nowhere have accumulated huge amounts of plastic waste, I think it would be interesting to look at how much is being produced there vs how much just ends up there.

What can people do at home to combat plastic pollution? Any pro-tips?

Just because you don’t live near a beach, doesn’t mean you can’t start at home: ditch those single-use plastics! Even if you’re not throwing them on the street, they might still end up there. We’ve all seen something fly off a garbage truck, it happens all the time. That being said, not everyone has the ability to make those changes organically. When I was in Guatemala, I saw so many single-use plastic products being used, like tiny one-off shampoo bottles, because it’s the only thing a lot of people can afford there.

Let’s talk about the connection between visual media, branding, and environmentalism. What is social media’s role in pushing environmental movements and messages forward?

From a marketing perspective, there’s always this question of- where should we be putting these messages to get people to take action? To me, it’s a no brainer: social media. That’s where people are spending all their time.

How do you navigate brand-artist partnerships? Are they the future of communicating environmental solutions?

My  perspective on partnering with brands is totally dependent on their mission. I try to be picky about who I partner with - I’m not going to get together with a company that makes, for example, single-use toothpaste tubes that never biodegrade. But I think it’s really cool to be able to help uplift brand voices that are actually making an impact on the future, like Pela. They’re an innovative brand that makes compostable phone cases, and they’re headed in a really awesome direction towards zero plastic pollution. It’s super rewarding to show people that composting, consumerism, and reducing plastic waste are all intertwined. 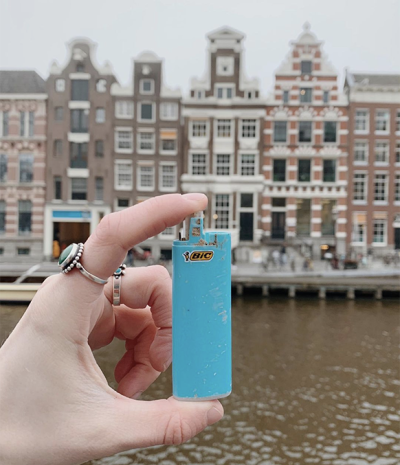 I was traveling through Amsterdam just picking things up along the way, and then flew home with a literal backpack full of trash. I filled up my parents' entire pool deck and started taking pictures. That was the first time I remember saying, I'm just going to post these and see what happens.
Hannah Tizedes

As environmental researchers, we’re always aiming to amplify the science and communicate our work in a way that is actionable and appeals to a specific audience. Any general tips for marketing research or environmental solutions?

I'm a super visual person. I love seeing a visual that stands out - like I see a picture of the earth burning and I'm like “Oh shit, climate change." This is my version of communicating plastic pollution to people, which turns into climate change and things like that. Giving people that visual makes them stop scrolling and think, “What are all those tampons doing there?” There’s the connection.

The plastic problem is tangible - you can see it. How can we market environmental solutions for less tangible issues?

I feel like I've seen a lot more specific stats and metrics in the past year; basically, you’re presenting people with all this information, it’s like asking them to read a book. People want to know what they can do at home. On my platform, I show people what is washing up, whether it be a tampon applicator or plastic lighter, and then give an example of a sustainable alternative. Giving people that action item is key.

Any advice for the novice environmental influencer?

I always tell people: Just put stuff out there and see if it’ll stick. For the first year of having my account, it didn’t stick. But I told myself that I’d post once a week, even if it's a picture of me holding a tampon at the beach. It was embarrassing at first - because it’s trash, you know what I mean? I thought, “What will people think? ‘Why is this girl posting trash?" I never used to consider myself an artist, but now I can confidently say that I am one.

If the plastics problem is theoretically solved in the future, what kind of art will you make?

I've actually been brainstorming a few projects! I want to take really old cell phones and line all of them up to the newest one, like a timeline or a lifecycle. I could also use plastic bottles, starting with the thick glass ones to show how they have progressed in the last 100 years - the old to the new. I also think it would be crazy to dig up a landfill in a few years and see what’s in it, layer by layer. You can tell so much about that time, like  an archeological hunt. My last project is photographing waste workers in different countries around the world, people who are sorting through mounds of plastic water bottles for anything useful.