Wild Pig Management at the Jack and Laura Dangermond Preserve 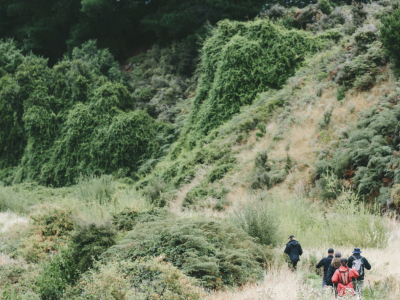 Wild pigs (Sus scrofa) are a nuisance species that are non-native to California and pose a threat to conservation and land management activities. In 2020, wild pigs were present in 56 of 58 counties in California with a growing population. On the Jack and Laura Dangermond Preserve, which is managed by The Nature Conservancy (TNC) and located about 50 miles west of Santa Barbara, there was a need to investigate the wild pig population present on the Preserve in order to ensure the conservation and stewardship of the land’s natural resources. Through the analysis of 400,000 camera trap photos taken from 2013-2014 and running an n-mixture model, a population estimate of ~2 pigs per km2 (or approximately 200 total pigs) was obtained. TNC was interested in three different management scenarios: total eradication, selective fencing, and increased monitoring. While pig eradication has been undertaken in other areas within California, the pig density is often higher than what is present at the Preserve, which makes total eradication a less cost effective approach. Thus our team recommends that TNC employ exclusion fencing to keep pigs out of high sensitivity areas while increasing monitoring efforts to close data gaps that are present. By taking these steps and collaborating with neighboring landowners, TNC hopes to set an example of natural resource stewardship through rigorous and research-focused invasive species management.