Roland Geyer recently did something that he hadn’t done for a long, long time: he went to the barber and got a haircut. For years, he just used a buzzer at home—it was easier and made him feel “thrifty and clever.” Yet after publishing his first book last fall, he thinks that paying for such services is one of the most environmentally friendly ways you can spend your money. 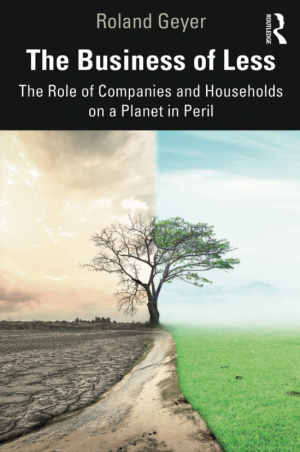 The Business of Less: The Role of Companies and Households on a Planet in Peril highlights the problem with our current approach to corporate sustainability: we look for ways to reduce the environmental footprint of products, but also increase their production and consumption year after year. Geyer calls for a novel approach where business activities reduce absolute environmental impacts, a concept he calls Net Green.

Writing The Business of Less

It started a few years ago when Geyer sat down to write a textbook for his Energy, Technology, and the Environment course for the Bren School's Master of Environmental Science and Management program, and the words just wouldn’t flow. It’s not that he didn’t know what he needed to write—he was, after all, trained as a physicist and had taught this course for ten years—but was bothered by what he constantly read in the news: relentless corporate sustainability optimism accompanied by increasingly dire predictions about the environment.

Something wasn’t right. There was a disconnect between the modern corporate sustainability gospel—which says that business can pursue growth and profit maximization while also solving environmental problems—and environmental scientists who say we need significant change to save the planet. Why wasn’t anyone writing about that?

It’s often difficult to speak out against gospels without fear of reprisal—but fortunately, the life of a tenured academic is designed to do just that. As Geyer puts it, “if I’m not the one who asks these sorts of questions, then who else would? I felt an obligation.”

So he switched gears and instead decided to pen The Business of Less.

The problem with modern corporate sustainability

Modern corporate sustainability is founded on two pillars. The first, eco-efficiency, states that our economy can achieve sustainability while maintaining growth by making things more efficient. For example, if gas-powered cars are releasing too many GHGs into the atmosphere, all you have to do is redesign the car to squeeze 40mpg instead of 20mpg—that way, each mile you drive has a smaller environmental footprint. Voila! Now your daily commute to work has half the emissions that it used to!

However, if people suddenly get 40mpg instead of 20mpg, they don’t just sit at home and smile about it. They save a few bucks on gas—and spend that money on other products, all of which have environmental impacts. Or, even worse, they drive to work instead of biking because their vehicles are more fuel-efficient. Either way, eco-efficiency doesn’t necessarily decrease overall consumption habits; it simply frees up resources for consumers to spend on other products. And as the landmark 1972 book The Limits to Growth pointed out, infinite growth is impossible on a planet with finite resources.

The second pillar, win-win, states that companies can protect the environment while seeking to increase their profits. Yet the profit motive does not just encourage businesses to become more efficient, but also to make and sell more every year.

As an industrial ecologist who studies the energy and materials flow that through our production and consumption systems, Geyer understands better than most that, so far, all our efforts to make products less impactful have been hopelessly outweighed by the relentless growth of the global economy. Unfortunately, for the last thirty years the framework of corporate sustainability was entirely built on the promises of eco-efficiency and win-win. So, if that isn’t working, what will?

Net Green to the rescue

Geyer’s time at the Bren School with colleagues actively working to solve environmental problems made him realize that “he can’t just write a book that says win-win and eco-efficiency don’t work and leave everyone depressed.” He needed something more—a solution, an alternative to the corporate gospel that had been long-preached by business schools the world over.

He first offered his vision in a 2016 article co-authored with his then doctoral student, Trevor Zink, titled “There’s No Such Thing as a Green Product”. In a nutshell, the article argues that all products have environmental impact, and we therefore need to shift our attention from how we produce and consume to how much. A product is thus green only if it avoids more environmental impact than it generates. How can we make sure that this actually happens?

Geyer’s solution is a concept he refers to as “Net Green,” which helps businesses and households to focus on their actual sources of environmental impact reduction. Given that we all need products to function in the 21st century—cars to drive, laptops to work on, and smartphones to keep us connected—he proposes four approaches that can help us achieve Net Green:

Net Green will be difficult to implement in a growth-based society where the largest and most powerful organizations are all publicly traded companies whose primary purpose is to maximize quarterly profits for their shareholders, but Geyer believes that this kind of radical change is needed for us to live sustainably.

Despite all of this, Geyer has hope for the future. A growing number of corporations have started to question shareholder primacy, and many new startups are deeply driven by values rather than profit. Part of this hope comes from the time he spends teaching and advising master’s students. As he puts it:

“It’s just wonderful to be surrounded by people right at the beginning of their careers, who are so value-driven and have the same overarching objective: to preserve as much as we can and help humans and nature live in harmony.”

Yet what can these young students do once they graduate and enter this working world? Is there any way that they can fundamentally change corporate sustainability?

Labor, not materials: the new win-win?

One of the more compelling points in Geyer’s book resulted from a discussion in his master’s Pollution Prevention class: that the most environmentally-friendly way to spend your hard-earned income is on labor—not materials. This is one sure-fire way to reduce the environmental footprint of your lifestyle. Even better, it means that you’re voting, with your dollars, to elevate the living standards of those around you by putting money in their pockets.

In other words, it’s better for the environment if you pay someone to cut your hair instead of buying a tchotchke that had significant impacts during production and will also likely end up in the landfill.

It seems to me—one of those master’s students that gives him hope for the future—that this is a new paradigm for environmental sustainability that has some real teeth. Reducing the environmental footprints of those who can afford to while increasing the living standards of the less fortunate could be the new “win-win” paradigm—one that could launch us into the 21st century and finally cure the disconnect between what we read in the news about business profits and the dire warnings from environmental scientists.

Matt Koller (MESM '22) is a writer and photographer currently based in Santa Barbara, California. Before coming to Bren, he worked as a whale-watching guide in Maui, a naturalist photography guide exploring the glaciers of Southeast Alaska, and a photographer in the mountains of Colorado. Matt is a firm believer that the quickest way to fall in love with the natural world is to spend time exploring it, and spends most of his free time surfing, hiking, biking, skiing, and dancing in the outdoors.

The Business of Less, The UCSB Current, 4 November 2021

The Business of Less: The Role of Companies and Households on a Planet in Peril first edition, published via Routledge Taylor & Francis