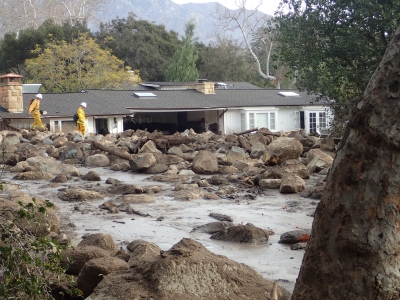 The movement of soil particles and rocks down hillslopes has formed the southern Santa Barbara County foothills over millions of years. The landscape has been shaped by the periodic cascades of soil debris in Santa Barbara County watersheds. Sediment transport from higher elevations to lower elevations, driven by gravity, can be exacerbated by soil cohesion, rainfall intensity, wildfire, and topographical relief. The combination of these factors influences the overall volume of sediment transported. Predicting the volume of a debris flow often has large uncertainty. Debris flows can have dire consequences, as evidenced by the post-Thomas Fire event on January 9, 2018, where 23 people lost their lives. With the built environment encroaching into potential inundation zones, adaptive management strategies can limit the risk to those most vulnerable. One such strategy is the conversion of existing debris basin infrastructure into slotted outfalls, which better facilitate the transport of fine sediments downstream while also providing improved fish passage for the endangered Southern Steelhead. In addition to infrastructure modifications, beneficial reuse of sediment such as beach nourishment provide further ways to address this issue, particularly considering a changing climate. This project (1) modeled debris flow probabilities and volumes with geospatial tools and datasets, (2) evaluated environmental and socioeconomic impacts of sediment from debris flows via cost-benefit analysis, and (3) examined the broader implications of climate change influence on debris flow recurrence and volumes.