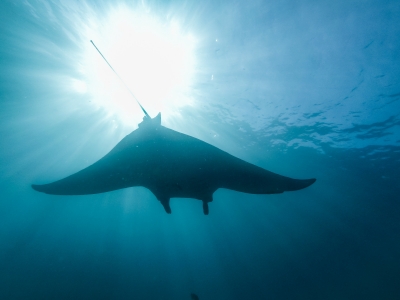 Sharks and rays, a class of marine cartilaginous fish (Chondrichthyes), have profound influence on marine ecosystems. They are often key predators in pelagic, coastal, and estuarine food webs. Many of these species are at high risk of extinction, with approximately one-quarter of sharks and rays categorized as threatened according to the IUCN Red List. Mozambique is a global hotspot for shark and ray species richness, endemism, and evolutionary distinctiveness. However, sharks and rays face many threats in Mozambique, especially from fishers, as over 20% of the population depends on fishing for part of their income. Marine protected areas may be an effective conservation strategy for sharks and rays if carefully planned. Our team has developed a spatial prioritization model that identifies key areas for shark and ray conservation within the Mozambique exclusive economic zone. The analysis considers ecological areas most critical to sharks and rays while also taking into account costs to various stakeholders. This project is an intermediate step in an ongoing marine protected area planning process currently underway in Mozambique. Our model will be used by Wildlife Conservation Society and the Mozambique government to ensure shark and ray protection is considered in Mozambique’s overall marine protected area network design.